by Henry Pettingill and Gary Citron

“It is amazing what you can accomplish if you do not care who gets the credit.”
Harry S. Truman

In 2000, a tipping point occurred when many companies wanted to see a consistent set of industry derived best practices around amplitude characterization for chance of success determination (prospect ‘risking’). In response, Rose & Associates’ founder Pete Rose and his Senior Associate Mike Anderson turned to former Shell and Maxus geophysicist and executive Mike Forrest to consistently weave seismic amplitude anomaly information into the fabric of prospect chance assessment. With the input of others, they decided to form a consortium of companies to capture best practices in a process that quickly evolved to include a user friendly software and database, which became SAAM (‘Seismic Amplitude Analysis Module’). They reached out to Geologist Roger Holeywell, who was actively commercializing other risk analysis software for R&A through a partnership with his employer, Marathon Oil Corporation, to serve as SAAM programmer.

The DHI Consortium officially began at Dallas Love Field on December 7, 2000, a day recorded famously as the starting flag, with the inaugural meeting of the 13 founding companies in January 2001. Shortly thereafter Rocky Roden (Repsol’s Chief Geophysicist and representative to first Consortium Phase, and a thought leader in geophysics) ‘retired’ from Maxus and joined Mike and Roger as the third director of the DHI Consortium. 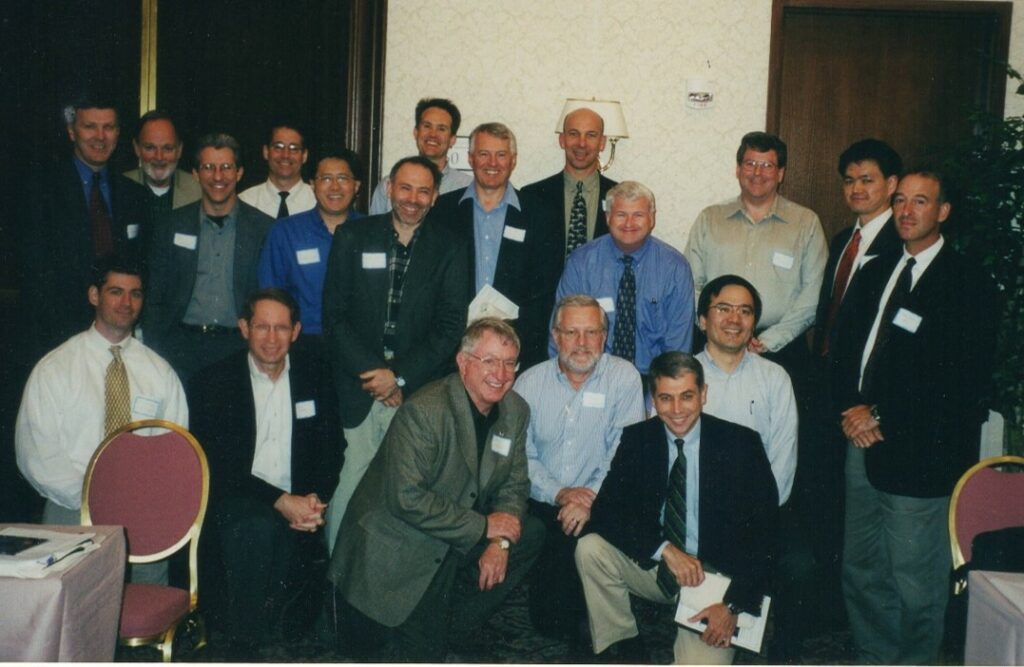 What is a DHI?

In many basins with sandstone targets (especially those deposited during the Tertiary Period), the seismic signal associated with that target can be quite strong. Rock density and seismic velocity contrast noticeably between units, and that contrast is amplified by the presence of oil or gas in the pore system, making accumulations appear ‘anomalous’. The most common measure of the strength of the anomaly is the seismic amplitude (amount of signal deflection). These anomalies first became observable in the mid-1960’s on relatively low fold seismic lines and yielded significant quantifiable information as the fold increased.

While interpreting such seismic data, a geophysicist will measure an objective’s amplitude level in comparison to the ‘background’ level surrounding the objective amplitude. Significant amplitude strength above the background is referred to as an ‘anomaly’ or a ‘bright spot’. Mike Forrest is credited as one of the first explorers to recognize the exploration impact of seismic amplitude-bearing prospects when he was a Gulf of Mexico exploration project leader at Shell in the 1960s. The acronym DHI stands for Direct Hydrocarbon Indicator, suggesting that the seismic amplitude (hopefully) results from hydrocarbon charge.

The Consortium for 20 Years

At the very first meeting in January 2001, the Consortium commissioned Roger to program an innovative interrogation process that facilitates a thorough, systematic, and consistent grading of the amplitude anomaly, based purely on observations (as opposed to interpretations). It begins with the geologic setting, a preliminary chance assessment solely from geology (as if no DHI were present), and many key attributes the seismic data are designed to extract. SAAM requires the exploration team to answer questions about AVO classification, seismic data quality, rock property analysis, amplitude character, analogs, and potential pitfalls (also referred to as false positives). In other words, SAAM successfully institutionalizes a process through which explorers address salient issues, forcing those who would otherwise treat it in a perfunctory fashion to digitally record the key information they may later forget or lose. Employing a weighting system, SAAM registers the impact of each scored characteristic to determine a ‘DHI Index’, which in conjunction with the Initial Pg yields a ‘Final Pg’. This ‘Final Pg” is now calibrated by over 354 drilled wells.

Initially each Consortium phase lasted 12 to 18 months. In 2016 Consortium phases were aligned with the calendar year to better synch with client budgeting. Consortium membership is paid through a phase fee and each new company that joins must purchase a license to SAAM. Companies may license a version of SAAM without joining the Consortium, but that version does not include the powerful analog and calibration database, which at the end of 2020 SAAM has 354 drilled prospects. The final Pg can then be analyzed in several ways, and critically compared to the success rates of similar DHIs and further calibrate the weighting system. SAAM’s burgeoning database is owned by Rose & Associates, with each member company having rights of internal usage.

In accepting AAPG’s highest honor in 2018 (the Sidney Powers award), Mike Forrest commented on the Consortium: “we expected it to last a year or two, and almost 20 years later it’s still going on!” Roger attributes the longevity to the breakthrough thought that meetings should be member-driven, designed around member company prospect presentations.

Can you think of any other venue to see drilled prospects, learn how they originated, how they were technically matured, the drilling outcome and lessons learned from the journey – all within two hours? Companies benefit from seeing the tools and techniques other companies use in the analysis. Although some companies are unable to share the exact location of certain prospects, all the key attributes are shown and a SAAM file is populated for each prospect in real time. Then the participants are asked for their opinions of prospect quality and ultimately whether they would drill it. The company then reveals the drilling results, and all inputs, outputs and drilling results are added to the SAAM database.

As member participation in Consortium meetings grew, with more younger staff involved, the challenge became how to get more people in the room involved to avoid domination of discussion by senior members? Roger answered this question in 2017 by introducing the use of individual wireless keypads (’clickers’) that quickly register, compile, and display the entire group’s answers to a variety of grading questions anonymously. This permitted the leaders to ask people to explain their diverse views, which highlights how differing perspectives can get the discussion to a higher level.

SAAM’s architecture and workflow has constantly evolved but were always based on a collaborative framework. For every prospect shown in a meeting, during a subsequent weekend the Consortium Leadership gathered again to review the SAAM file, assure consistency, and discuss what could be improved in the software, based on key observations from the prospect presentation.

Founding Consortium Chair Mike Forrest still consults with Consortium, which since 2019 has been under the direction of R&A’s Henry S. Pettingill. Henry was a member of the Consortium with Repsol during its inaugural year, and as Director of Exploration at Noble Energy, oversaw their participation since 2002. Roger and Rocky have guided and influenced technical direction for Consortium throughout its history. With companies opting in and out through the years, much of the stewardship of SAAM (updating functionality, testing, checking for consistency and database trends) are left up to Roger’s discerning eye. He takes advantage of the crew changes, always on the lookout for the fresh perspective provided by new Consortium member feedback.

But there is also a strong bond between many of the members, some of whom have interacted in and out of the Consortium for over 20 years. One of the highlights of Consortium meetings in Europe is the way each host company highlights the unique aspects and special history of their city and culture through a ‘networking dinner’ featuring the local cuisine. These became an instant tradition, strengthening the network by building friendship amongst the industry’s elite DHI practitioners. There have even been occasional field trips to classic locations in Europe and South Africa.

Each year, the Consortium typically holds five meetings in Houston and three in Europe. Since March 2020, due to the COVID-19 pandemic, the meetings were replaced by monthly webinars. This turned out to be a blessing in disguise as it caused a surge in participation and expanded the reach of the Consortium. Whereas most people can attend a meeting only occasionally (and those in remote field offices virtually never), webinar attendance far exceeded regular meeting attendance, with new participation from field offices in the Netherlands, Oman, Malaysia, Indonesia, and New Zealand. 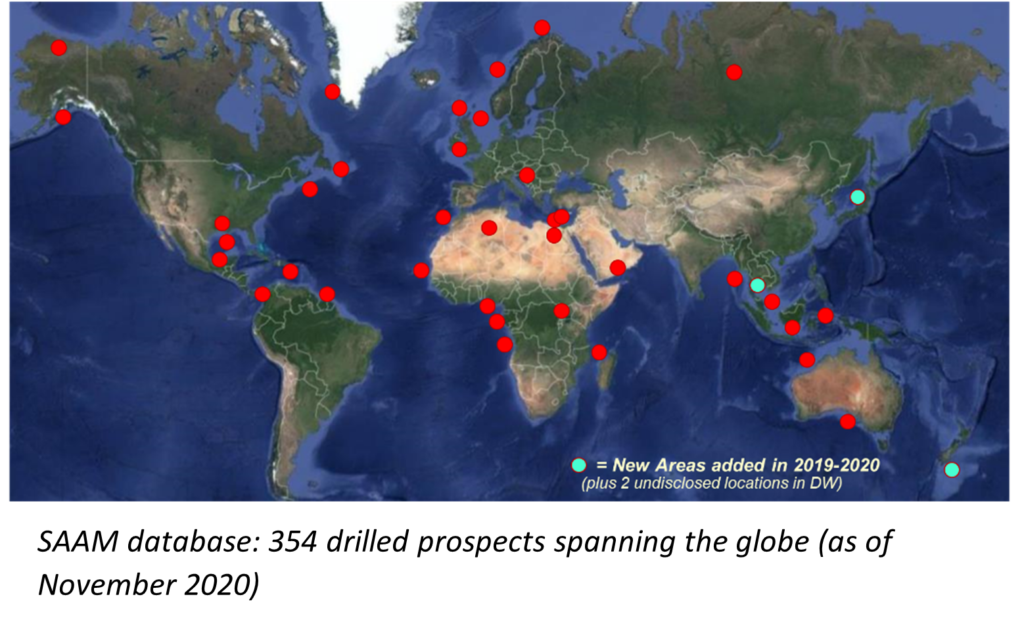 As we celebrated our 20th anniversary in this month’s webinar, we looked back on the 20 years and some of its accomplishments – too many to list here. In numbers, the SAAM database has 354 drilled prospects from 30 basins, allowing calibration of assessments of undrilled prospects, as well as providing valuable benchmarking data. Over 80 companies have participated, most of whom have contributed drilled prospects to the database, and we have 36 member companies this year. But probably the most enduring accomplishment is the heightened prospecting skills and intuition of the participants. This has resulted in Industry’s most comprehensive DHI prospect database, all evaluated using consistent methodology and peer reviewed by a roomful of advance practitioners. 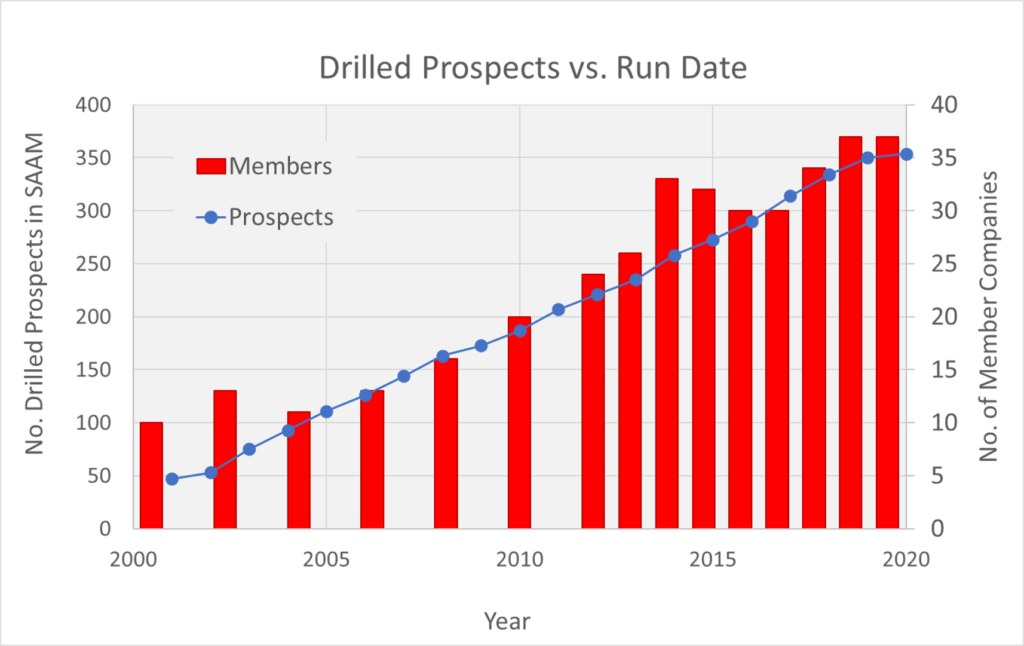 Perhaps most remarkable is how the Consortium has evolved with time and technology. For instance, seismic imaging and other advances have allowed for things unthinkable just a few years ago, like imaging amplitudes beneath salt. Computer power and machine learning have allowed analyses like never before. And each year, the Consortium sets goals according to where we are in this evolution.
It all leads us to ask: what will the next 20 years have in store for us? Most all of us agree that changes will continue to come in DHIs and associated exploration technologies, and make the unimaginable not just imaginable, but even more fun.

This entry was posted in Uncategorized. Bookmark the permalink.