What plays should we position our company in for future growth?

PlayRA addresses the question above… one of the most critical questions facing Exploration leaders.

PlayRA guides the geoscience and engineering team through the Play Analysis process resulting in the generation of a fully probabilistic resource and commercial discovery characterization and valuation of the play. 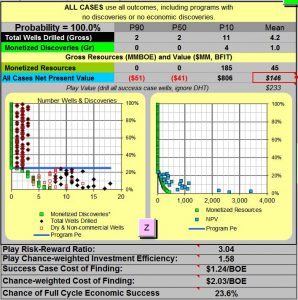 Build the available economic resources for the play based on your views of the appropriate field size distribution and the economic threshold field size required for a “host” development facility. Simulate economies of scale by entering a smaller commercial threshold for “satellite” discoveries that can “piggy-back” on the capital investment in larger “host” discoveries or that can be amalgamated together like “peas-in-a-pod” to support their own host facility.

Model the play chance system by depicting both the shared (play-specific) and local (prospect-specific) probability factors for the opportunity.

Interactively explore the impact of different drilling activity levels on the overall success characteristics for your play opportunities. Estimate your company’s dry hole tolerance in order to investigate maximizing the probability of play economic success while minimizing the trade-off of its failure cost. Observe how drilling more prospects in the success case increases discovered resources, their value, and overall contribution to corporate goals. 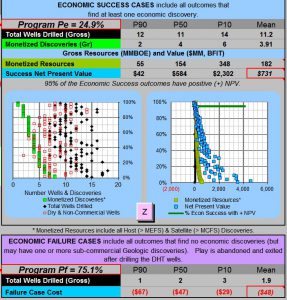 Incorporate exploration costs to be incurred over the life of the initial exploratory program and the subsequent success case exploration program so that both can be escalated through time and discounted to their present value.

Then, use the powerful, fast proprietary Monte Carlo engine to perform the play simulation.

View detailed iteration results to gain a quick understanding of the range of success and failure outcomes possible for the play.

PlayRA provides a clear presentation of the success case and failure case simulation results. View the uncertainty associated with number of wells contributing to the number of monetized discoveries and the value of resources. Abundant economic metrics are available to compare and contrast the various play opportunities being considered.