Abridged from a presentation by David Cook and Mark Schneider.
View the original poster
Read the full paper

Rose & Associates introduced the Pwell concept at the AAPG 2017 convention in Houston and released the methodology in our Multi-Method Resource Assessment (MMRA) program in early 2018. This method is now available in RoseRA, our current prospect risk analysis software. The Pwell function in RoseRA provides insights into the balance between the chance of success and the potential resources when a well is drilled in a location that is downdip from the crest of the structure.

The Pwell function in RoseRA requires that an Area distribution be modeled using either the Area-vs-Depth or Area x Net Pay rock volume estimating methods. Users can input the closing contour area at the proposed well location and run the simulation to calculate new metrics for the well location including:

In the following example, the team has proposed a downdip well location at 2,000 acres. The total prospect has a Pg = 50% and a Geologic Mean of 56 mmbo based on an area distribution with P90 of 1,000 acres and P10 of 6,000 acres. The commercial MCFS is 25 mmbo which results in the probability of commercial success being 37.1% and a commercial mean of 70 mmbo. Input the downdip closing contour area of 2,000 acres into RoseRA and run the simulation to observe the results. 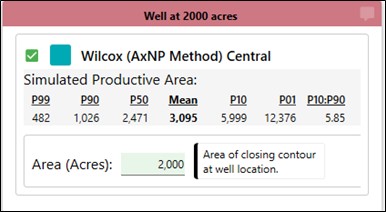 Figure 2: Downdip Geologic and Commercial Chance of Success are reported.

The Pwell chance of success decreases the further downdip the well is drilled. In this example, the Pwell geologic chance of success at the 2,000-acre downdip location is 34.0%, much lower than the crestal Pg of 50%. The tradeoff is that the proportion of the commercial downdip resources is high (95.5%), making the Pwell commercial chance (32.5%) only slightly below the Pwell geologic chance. Given success, you are almost guaranteed a commercial accumulation by drilling at the 2,000-acre location.

There is still the possibility of resources being present updip if the well location is dry. What is the commercial chance of success for the potential updip resources given a dry hole?

Figure 3: Updip Geologic and Commercial Chance of Success are reported.

Use Pwell to investigate the updip and downdip geologic and commercial resources as shown in the Pwell log probit below. 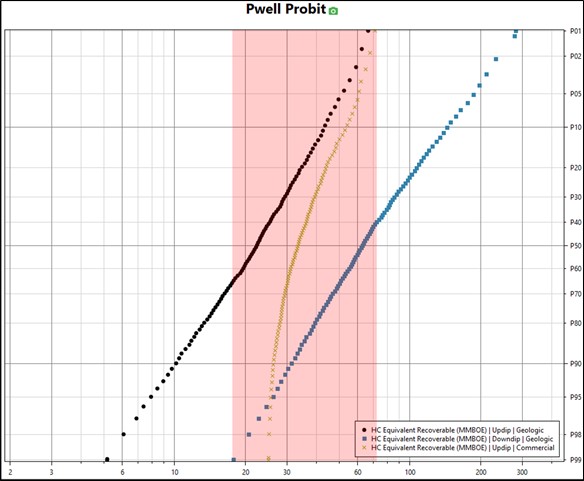 With the commercial MCFS of 25 mmbo, the updip commercial resources (green) shows the updip Pmcfs is 41.1% and the updip Pc is 20.6%. This commerciality possibility might tempt management to spend additional capital to test for an updip commercial accumulation. If this is the case, perhaps the well should be drilled further updip to minimize total drilling capital.

Another metric that has been used in the industry to gauge whether or not to spend additional capital is the “No Regrets” resource, which is calculated as the updip productive area above the drilled location multiplied by the updip mean net pay and the updip mean oil yield. Figure 5 shows the “No Regrets” resource is 38 mmbo. Notice that this method provides a deterministic value to aid in decision making instead of the full updip distribution and additional insight that RoseRA provides.

RoseRA provides the ability to model multiple zones, multiple wells and multiple downdip Pwell areas, shown as vertically stacked zones in a single file. It simulates and reports all entities within the same simulation. Figure 5 shows the updip and downdip chances and EURs as increments from the crest to 2,500 acres. Determine which downdip location balances risk, volume, and value for your company.

Figure 5: Sensitivity Analysis of Multiple Well Locations Can Be Done within a Single Simulation

The RoseRA Pwell function reports clear tabular and graphical outputs so that the rationale for drilling the exploration well downdip can be discussed and communicated with team members and management. Pwell helps facilitate the chance of making a commercial discovery while minimizing the need to spend additional exploration capital. Such scenarios might involve drilling a downdip appraisal well to confirm commerciality, or in the event of a dry hole, avoid drilling an updip sidetrack or additional well to determine whether there is a “left-behind attic” resource. A dry hole with the potential for updip commercial EUR creates a real conundrum. The Pwell analysis with updip and downdip distributions can help clarify a better decision.

This methodology can also help users select locations for appraisal wells. The only difference from the exploration example above is that the crestal exploration discovery results in a prospect Pg = 100%, and the Pwell analysis is performed using the updated resources distribution following the discovery well.

Contact Phil Conway and David Cook at Rose & Associates today to get a demo or more information.

The implementation of Pwell in RoseRA is built on the methodology described in the following reference:

This entry was posted in Uncategorized. Bookmark the permalink.